The name in this 1880 census enumeration does not look like Henry Herzog, but that’s what it is. This entry from Hancock County, Illinois’ Walker Township (family 193, dwelling 195)  looks like Henry something or other.

The census taker was a German native and wrote in a handwriting that was difficult to read. It is very possible that he wrote “Herzog” the way it sounded to him. Henry Herzog was a German as well, but if he and the census enumerator were from different areas and spoke differing dialects the rendering of the last name could be very creative.

Always consider how your ancestor said his name.

Always consider how the keeper of the record heard the name and what biases he may have had.

Because sometimes all three are playing a role. 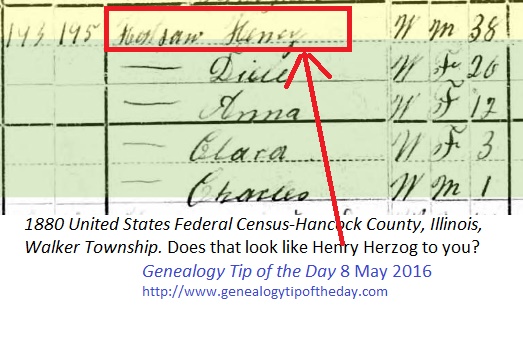