Similar names do not always imply the same people. 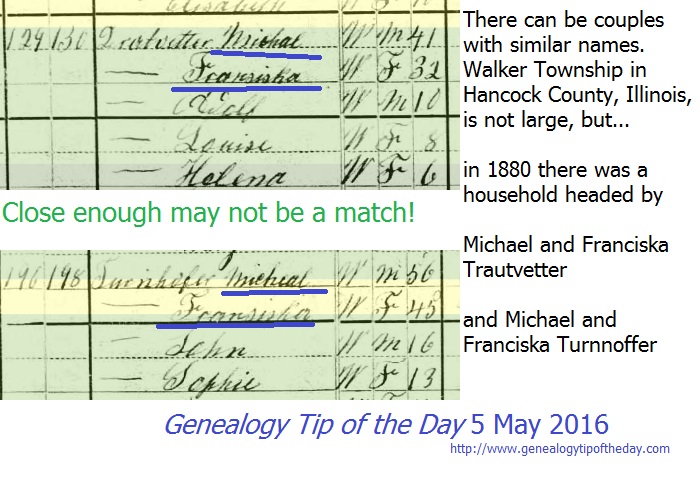 When ancestors “disappear” from records after they’ve reached a certain age, it usually is suggested that if they “didn’t die where they were supposed to,” that one look for them living near or with one of their adult grown children.

Several of my ancestors who “disappeared” were actually living near one of their children after their “disappearance.”  Melinda Newman and her husband were living in White County, Indiana, after their children had left for other states. When I could not find Melinda after her husband’s 1861 death, it was because she had moved to Linn County, Iowa, to be near several of her grown children.

Not everyone does that. Melinda’s own son, William Newman, did not. After his children had all left the nest, William and his wife moved to Macon County, Missouri, several counties away from where one of his daughters lived.

Not every ancestor follows the rules.

Your ancestor’s civil marriage record may contain the name of the preacher who married your ancestors or the church with which he was affiliated. Try and see if the church has any extant records. Church records may provide more information about your ancestors.

Or they may not.

Or your ancestors may have been married by a Justice of the Peace–in which case there won’t be a church record of the marriage.

When there are multiple marriages for multiple people, a chart may make it easier to visualize the relationships. In this case, the middle children are half-siblings to the left children and the right children, but the left and right children do not share a biological relationship.
In this example the children from the very first marriage and very last one shown did not live near each other and probably never met, but many times that is not the case.

[note: the typo in the image has been fixed]

Genealogy Search Tip of the Day is sponsored by GenealogyBank—search for your ancestors.

Make certain you have completely tracked children your step-ancestor might have had with spouses besides your direct line ancestor. After my ancestor died,  his second wife married again and she had a child with that husband. Tracking down the second wife, her second husband, and their child may lead to something that helps me search the actual ancestor.

Genealogy Search Tip of the Day is sponsored by GenealogyBank—search for your ancestors.

There are many ways your ancestor might have obtained federal property. Military service before the Civil War may have made him eligible for bounty land, he may have made a direct cash purchase, he may have been an early settler who filed a pre-emption claim, a homesteader who worked the ground the required amount of time, or someone who obtained property in another way.