To get Casefile Clues at the “we’re back” discount rate.  It’s significantly more detailed than my tips or Rootdig blogs–and it’s easy to follow and understand, less intense that the “journals.” Enhance your research skills today.

My uncle was married to his wife for ten days when he died of the flu in 1918. His widow never remarried and lived the rest of her life with her parents. In at least one federal census, she was enumerated with her maiden name. The listing is probably an error as later record use her married name.

Everyone else in the household had the same name, except my aunt. It is very possible that the census taker simply got confused.

Do you have a female relative who is inadvertently listed under their maiden name in a record created after their marriage?

Recently I was reviewing information in a pension application. There were two records in the application that felt like they were extra and not really needed. I read them over and kept trying to “figure them out” as if there was some arbitrary deadline for me to figure it out.

There was not a deadline.

I put the file away and worked on something totally unrelated.

When I went back to the file a few days later, the reason became clear.

Sometimes one simply needs to put it away and come back to it later.

To reduce confusion, we are posting a summary of my blogs and newsletters.

The blogs are published on the following websites. Any of these blogs can be received daily in your email for free by subscribing using the links on the individual blogs.

My two fee-based newsletters (because we have to pay the bills): 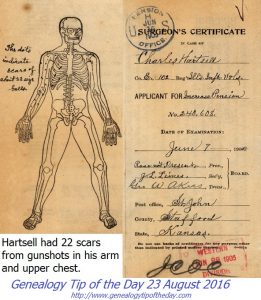 injuries as completely as you would like. After all, war time is focused on war. The military pension file may contain more documentation of your ancestor’s battle injuries. This 1905 medical report indicates where the veteran’s battle scars were.

Military pension files for Union veterans of the Civil War are housed at the National Archives.

If you are having difficulty jumpstarting your relative’s memory, try using the names of neighbors from a census or city directory. The 1940 census is recent enough that names of neighbors may be familiar to someone even if they were not alive in 1940.

Memories about a neighbor may help fill in a few blanks or it may even cause your relative to remember more about their relative.

A reader on our Facebook page had an excellent idea for helping to jog the memories of older family members. She made a scrapbook of old pictures with room for the person to write down what they remembered about the people in the picture, the location, etc. Generally the pictures were used as memory prompts.

The relative could then write in the book at their leisure as things came to mind.

Sometimes an interview simply isn’t long enough or memories come flooding back after it’s over.

Google won’t read sloppy cursive script (at least not yet), but searching for other key words near the mystery word can assist in transcribing that word.

Use Google to give you suggestions, but don’t forget to use your common sense and contextual clues.

Every event in your ancestor’s life takes place in context. If your ancestor does something on a specific date, there may be other people doing that same thing on that same date:

The commonality of the date may mean nothing. It may also be significant. Just don’t ignore it. Looking for “same day people”  is an excellent way to locate your ancestor’s friends, associates, and neighbors, what Elizabeth Shown Mills (author of Evidence Explained) calls the FAN network.

Your ancestor didn’t live in a vacuum. Using the FAN approach requires some air <grin>.

Statements and affidavits are not in a military pension for arbitrary reasons. 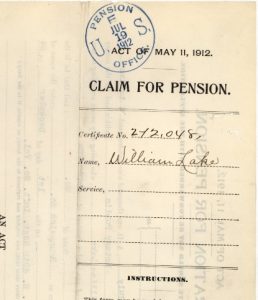 Typically the veteran may have to show or document:

Widows need to provide additional documentation. There may be papers that appear extraneous, but there usually was a reason.

A big thanks to GenealogyBank for being our sponsor! Please check out their August offer for Tip of the Day readers, fans, and followers.