I realize county boundary changes can create genealogical research challenges, but there are times when it seems like some individuals think those changes are the solution to every research problem. It’s not. Just because an approach works sometimes or because you heard a professional use it a few times does not mean that the approach works all the time.

An individual was having difficulty locating the birth certificate of their ancestor in a rural Illinois county in 1902. The first two responses to their question were: “did the county boundary change?”

It is important to be aware of county boundary changes. There is no doubt about that, but context matters. By 1902 in most US states east of the Mississippi River (and quite a few others to be honest), county boundaries, except for the very minor tweaking, were pretty much set. And people knew for the most part just about where those lines were. County boundary changes can be a problem, but usually (with exceptions) they are problems in the early days of settlement in an area. Most county boundary issues with records after the early days of settlement involve people moving across them or living near them instead of the lines changing.

In 1902 Illinois was not newly settled. Oklahoma, New Mexico, and other areas were more recently settled and more likely to have boundaries that were a little more in flux.

Failure to locate a birth record in 1902 in Illinois is most likely the result of the event not being recorded, the family living briefly in a location unknown to the researcher (and in a different county), or the name having been rendered on the certificate in such a way that makes interpretation and location difficult.

One approach cannot be used to solve every problem. That’s true in life and in genealogy research as well.

Some researchers are anxious to begin their foreign research as soon as they learn they have an ancestor born in a foreign country. This hasty approach may cause you to look in the wrong place or to lack adequate information to perform your search “across the pond.” Research the ancestor in the area of settlement first, as completely as possible. Doing so may provide more detailed information about his or her origins and may also give you names of potential siblings or relatives who might be easier to track across the ocean.

Complete research in the area of settlement (expanding into known relatives who immigrated as well) generally helps the researcher to pinpoint where “across the pond” they need to research. There are exceptions (my Annie Murphy for example), but complete documentation in the area of settlement helps even if it does not does not lead to an immediate “across the pond” breakthrough.

We often want something “personal” about our ancestor and, when pictures are not available, signatures can be a great substitute.

Just make certain that it really is your relative’s signature and not something written by the clerk or records official. In the US, record copies of deeds, wills, and other documents contain transcriptions of what was in the original document–including the signature. That’s the case with the “handwriting” of the Sledds’ in the illustration. It is from the record copy of the deed they signed. The record copy of a record is the official copy retained by the local records office.

If you have located an image of the actual deed, will, etc. then that rendering usually is the actual signature. The 1889 signature of Ulfert Behrens (as shown in the illustration) is from an image of his will made from the microfilm copy of his actual will which was retained in the packet of papers from his estate settlement. There is also a record copy of that will, which contains a handwritten transcription of it. That transcription only contains the clerk’s handwritten copy of his signature.

If you are uncertain if you have located the signature or just a handwritten copy of it, ask someone familiar with the specific records for their assessment of what you actually have an image of.

Is it possible that the place of birth you have for an ancestor could be wrong? Look at the actual source of that information and ask yourself exactly how reliable is that type of record and what is the probability that the likely informant on the record actually had good knowledge of the information?

A DNA test is not a pair of socks.

A DNA test is not some coffee table book that will sit unopened gathering dust until your children clean out your house and donate it or throw it away.

Once taken and submitted for analysis, a DNA test has the potential to unlock some details about your family’s past and start a lifelong trek of wonderful discovery. For those with little interest, it may be a fifteen minute diversion.

Then there are other situations.

Just something to think about.

Of course, you may gain some clues or insight by researching this person, but if you find no biological connection between the individual and your family be open to the possibility that “Grandma” wasn’t really “Grandma” after all.

Those non-biological relationships mattered to our ancestors and they should matter to us as well. They give us a fuller picture of our ancestor’s life. They can help us overcome some of those research challenges that we all face.

DNA tests can help determine if those relationships we think are not biological actually are. The thing to remember about DNA tests is that they only show us those family members who are connected by biology. 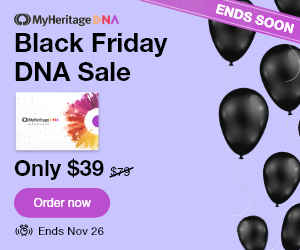 Happy Thanksgiving to our readers in the US. I’ve been thinking about what genealogical discoveries I’ve been thankful for other the past year or so—and making certain that I’ve documented those findings, organized the material that I have located, and reviewed the material for extra clues contained in those items that I may have overlooked.

That last part is perhaps the best: it’ll take me a while to review the Virginia chancery court cases that have been my best discoveries of the year.

If you’re inclined to spend a little money over the post-Thanksgiving weekend, considering using these links as it helps Genealogy Tip of the Day when you do.

So you interviewed your relative twenty years ago when you first started genealogy. Have you thought about interviewing them again?

Maybe they remember something now they didn’t remember before or are willing to discuss something they didn’t want to discuss twenty years ago. You may have discovered new information you want to mention to them or ask them about. Relatives who “were the reason they kept quiet about certain things” may not longer be living and the reason to be quiet may be gone.

It is worth a shot.

Why would an ancestor give a child $1 (or another token amount) in a will? Basically to show that they had not been left out.

The child could have had a falling out with their parent, or perhaps the parent had already given them their inheritance, maybe when they got married, started some type of business, bought their first farm ground, etc. Don’t assume that a token bequest in a will means that the individuals had a falling out.

Help support Genealogy Search Tip of the Day by visiting any of the following sites:

I discovered quite a few court case references to members of my families in Amherst County, Bedford County, and the City of Lynchburg, Virginia, in the late 18th and early 19th centuries. Because of that, I assumed that my family lived in the general area where those three jurisdictions meet. My research focused on those counties and cities met. Campbell County was a logical location to search for references as well.

But apparently, one widow ancestor moved to Augusta County, some time before 1799 and a dispute over her estate was located in the Chancery Court records of that county. I had assumed that she had remained in the county where her husband had died earlier and where most of her children lived. I was wrong. One of her children had moved to Augusta County and it was not until I began researching them move completely that I found the reference to the mother’s estate.