There’s one reason I track the source of where I obtained a genealogical record: myself. Today I was looking at a digital image I had of a record. Because I sourced it, I knew that I had made the digital image from a copy of the microfilm at the Family History Library. That’s different from a scan I might make of a photocopy I made at the courthouse years ago, different from a scan I made of a paper copy I made from a microfilm printout, and different also from a picture I may take of the actual record.

All of these have differing levels of detail from the document.  If I don’t know where I got it, it makes it difficult for me to assess years later whether it might be worth getting a copy of the original.

When transcribing a document or an item from a document, use brackets to indicate when you are “guessing” at a word or phrase or adding a word or phrase of your own. Personally I add words or phrases rarely, preferring to comment later if something warrants it. The word sic (Latin for “as is”) should be bracketed as well when it is used to indicate that you copied something exactly as it was in the document–even though it looked wrong.

For example, “…to my son[sic] Elizabeth I leave my farm…”

There is usually a slight difference between the legal use of the word “heir” and “legatee.” An heir usually is someone who has a biological or legal right to inherit from a deceased person, even if that person leaves no will. A “legatee” is someone mentioned as being given property in a deceased person’s will.

A recent posting on Rootdig covered the nuances in a specific example from 1903.

I have a great aunt whose birth name was Adolphena Katherine Trautvetter. Apparently as a child she went by Kate and as an adult she want by Pheenie. Nicknames can change–and not just back to the “original” name.

Your relative’s tombstone may not have been erected immediately after her burial. Consequently, various details may have been given to the stonecutter from a memory which may have not been precisely accurate.

Court records indicate one relative who died in 1888 did not have a stone erected on her grave until 1906. Is it possible your ancestor’s stone was erected decades after his death, perhaps with information submitted by someone whose memory was not quite accurate?

If the remarriage is subsequently later or in a different locality the records may be more detailed than when the couple first married.

Individuals who remember precise dates can easily be a few days (or more) off. It’s been only a few months since my mother passed away, and a few days ago I thought that 24 May (the day this post originally appeared) was the two-month anniversary of her death.

I was three days off. If, after two months my memory of the date is a little fuzzy, imagine how off it could be if it were years later.

Don’t be surprised if dates of events given well after the fact are a little inconsistent. It’s normal.

FindAGrave is a great site and can be helpful in finding burial locations and tombstone images. Just remember that what’s on the memorial page may be more than what is actually on the stone. When adding information from FindAGrave to your genealogical database don’t include as a stone “transcription” what you are not certain is on the stone. You can indicate you found it on the Memorial Page on FindAGrave, but don’t indicate the stone says things that it does not.

The Memorial Pages for two of my great-grandmothers includes birth information that is not on the stone. That’s fine, but  I should use the image of the stone for my transcription so that I don’t indicate in my records that stone says something it does not.

Remember when analyzing sources and the information they contain that just because a majority of sources are consistent does not mean they are correct. They may have had the same “original source” that was simply copied over and over and that “original source” may not have been right.

Just because the majority of sources agree does not mean that they are correct. Analysis isn’t always that simple.

Don’t forget to look for the entire family in a city directory. In this small town the others were easy to see, but in an urban area it wouldn’t have been so obvious that the wife and children were living in a separate location. 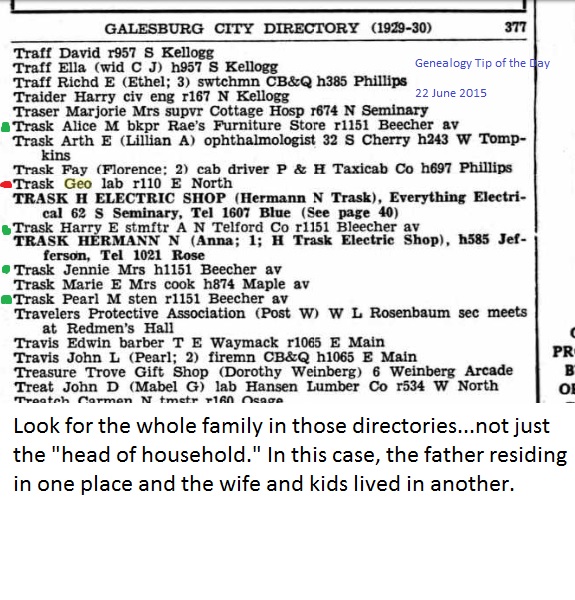