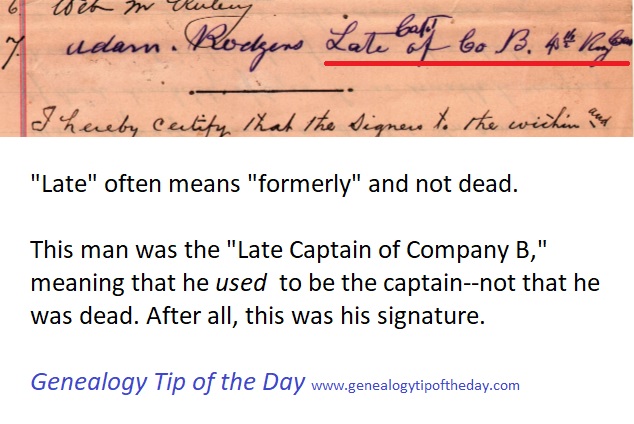 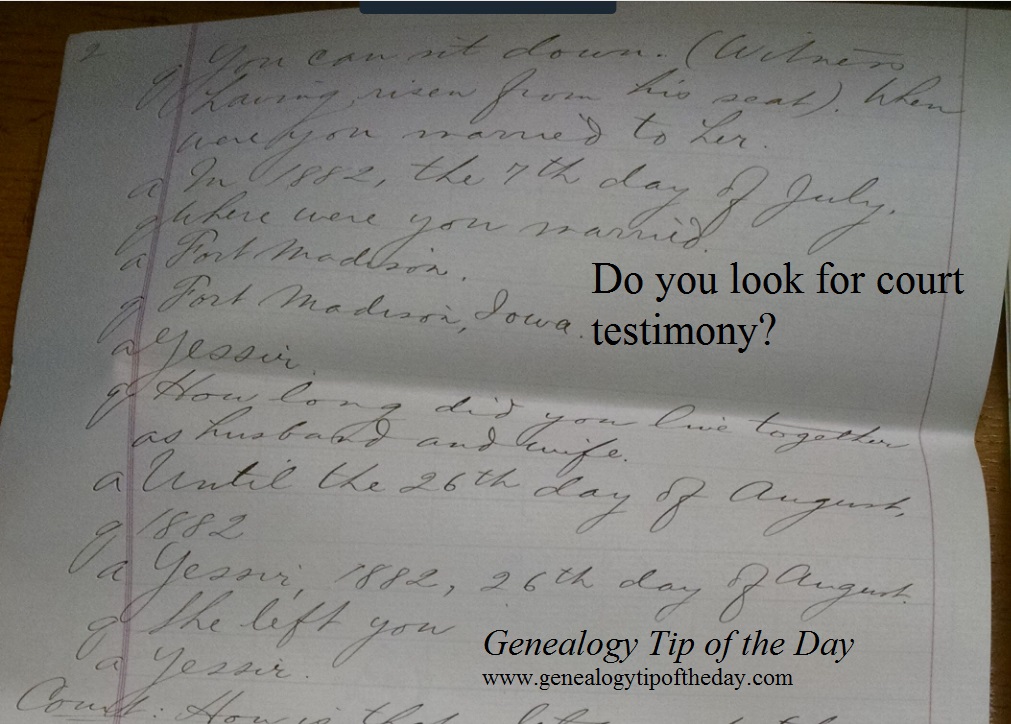 If you find a relative in a court record, do you know how to search for transcripts of testimony, petitions of plaintiff, responses of defendant, and other original court documents? Entries in journals and ledgers may only be part of the record and are a great place to start, but there may be more. The difficulty is that in some cases these records were never kept in the first place or they are no longer extant.

But it is worth your while to find out. The local courthouse that houses the court record you’ve found is the first place to look. Local historical/genealogical societies may be able to give some guidance in addition to locals familiar with the records. Older records may have been transferred to the appropriate state archives. 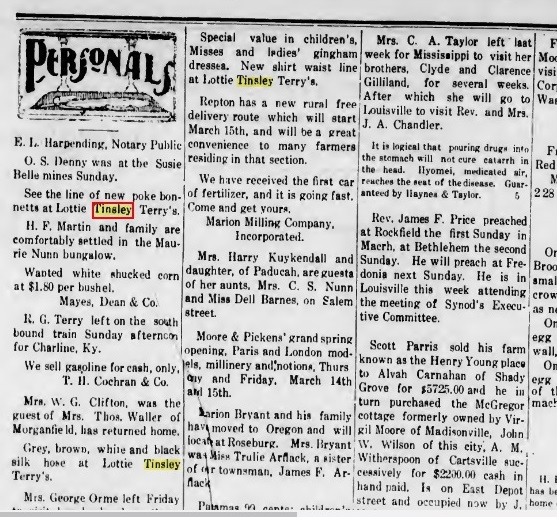 It can be frustrating when a gossip column in a small-town newspaper mentions a relative and doesn’t provide clues about their life that we’d like to know. There are two things to keep in mind:

Do you include an image of the back of a photo where someone has written the names of the individuals? This preserves any information contained in the writing that you may have overlooked, lets others see if you transcribed the names correctly, and (if you identify the handwriter) gives others samples of handwriting that they may find useful as well. There’s information about the provenance of the picture as well (at least as much of it as I have). 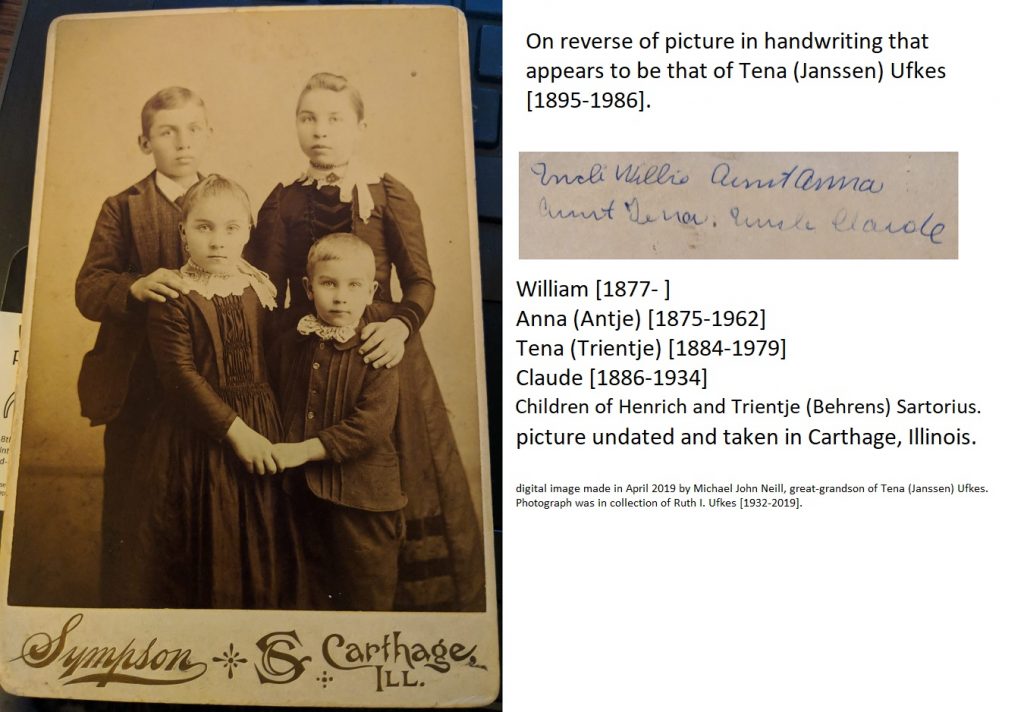 It didn’t dawn on me until I looked at this image that my great-grandmother had put the names on the back in the way the children were positioned in the picture.  I just listed the names when typing them out because the exact identification had been included. 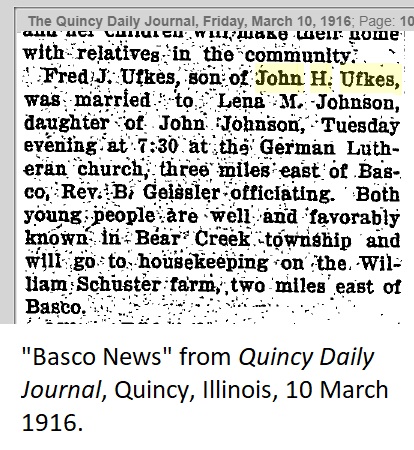 If the time period is right, newspapers can supplement what is in a marriage record.

The 1916 civil marriage record for this couple gives the name of the officiant and the date of the marriage, but does not provide the specific location of the marriage. The church record of the marriage does not make clear whether the marriage was at the church, the parsonage, or somewhere else where the minister presided.

The newspaper account does give that location. In this case it also provides the time.

Of course when stating the fact that the couple were married in the parsonage, the newspaper item would be used as that is where that detail was located.

Military pensions can be a great source of information. Sometimes the clues are blunt and obvious. Sometimes they are a little more subtle. One set of clues that can be helpful is how long witnesses have known the person they are providing information on. In a high proportion of pension applications, the witnesses indicate how long they have known the veteran or the widow. Assuming that information is correct, it can be used to help track the veteran’s or widow’s movements. The start of the association could be because either the witness or the person they are talking about moved in proximity to the other one. Look at the time frame of the association and see if it precedes before the veteran was known to be in the area where the affidavit was made. Were they neighbors “back East” or when they lived somewhere else?

And the associate may have also been a relative without ever stating it.

In one file, based upon the number of years they had known each other, the witness and the pension applicant must have lived near each other before they immigrated to the United States. That was a big clue.

Association time frame clues are not always quite that big, but it never hurts to analyze them.

DNA analysis can be complicated when one doesn’t know too much about their tree. Those of us who have ancestors who for generations lived in a rural area or a small tight-knit community have at least two additional issues that can compound the analysis of our matches:

When there are gaps in your tree, these issues can make people appear to be related in ways they are not when analyzing DNA matches.

For a little more read my longer post on “Another Confusing Set of Shared DNA Matches.” 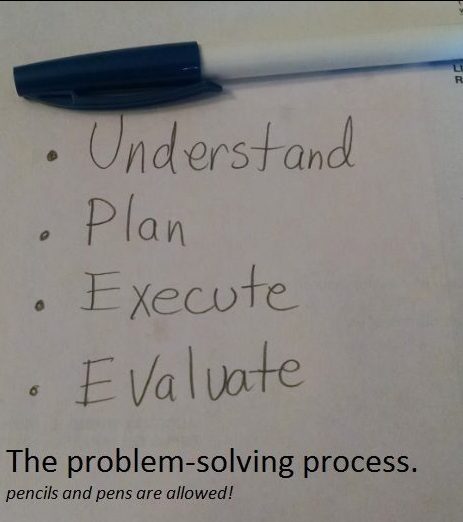 Some of us use a modified version of Polya’s 4-step problem-solving process:

Problems need to be stated clearly and succinctly (usually involving one person and one key event in their life).

Understanding involves knowing all relevant terms, how to access all records in all jurisdictions, etc. That’s not always an easy task, but it’s key to the entire process. Planning what to do comes next, Executing the plan (and tracking it) follows before the evaluation.

And then you go back to understanding–because either you solved the problem or you have more problems to solve.

Those with an interest in Polya (he was a mathematician) can read his book “How to Solve It” which focuses on the problem-solving process as it applies to math problems.

Some things to remember about DNA tests:

It can be difficult sometimes to tell which and it’s best to avoid rushing to judgement. Use any dates in the document itself to establish some broad time frame for when the event could have taken place. Be certain to cite the source and include the name of the known or probable informant. The information can’t be analyzed if you don’t know who gave the information and the circumstances under which it was given.