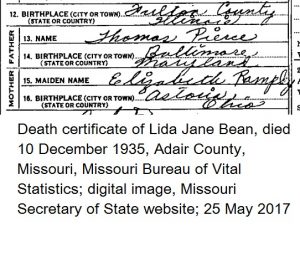 On the surface the place of birth looks incorrect for the mother on this death certificate. Astoria, Ohio, is relatively near to Cincinnati–a significant distance from Coshocton County where the Rampley family lived.

Elizabeth (Rampley) Pierce was born around 1820 and this death certificate for her daughter Lida provides secondary information on Elizabeth’s birth.

I should not just ignore the reference because a quick initial search suggests it is wrong. That may not be the case.