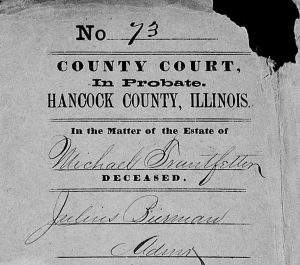 Michael’s siblings, nieces, and nephews were his heirs.

Is there a relative who never had any children of their own, had no siblings and died owning enough property to require a probate or an estate settlement?

If so, the records of that settlement may be particularly interesting. The deceased person’s heirs-at-law typically would have been their first cousins or their first cousin’s descendants. Even if there was a will, these heirs-at-law typically would have had to have been notified of the probate. Those records could help determine relationships and indicate where people were living at the time the relative died.

These estate or probate records would typically be filed at the local court level.