When encountering a family of parent(s) and children, always consider the possibility that the children are not full biological siblings. Some children could have been from previous relationships either parent had and others could be theirs together. Even if there were no divorces or separations, previous spouses could have either abandoned their family or died. Left with children to support, remarriage was relatively common especially if the remaining parent’s economic status made it necessary.

Never assume that what appears to be a “husband wife and their children” actually is. It may not be. 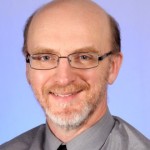 I’m excited to be presenting at the May 2019 seminar of the San Mateo County Genealogical Society in Menlo Park California. I’ll be presenting four topics:

The last session is about two 19th century German immigrants to Illinois, but it’s not just about Germans and it’s not just about Illinois. Barbara was married two, three, or four times–depending upon how you count and Gesche’s two daughters left no descendants but presented their own research problems.

Note: One place on their website (as of this writing) indicates the seminar is in 2018–guarantee you it’s not!

Email me to have me present for your seminar

If the item of interest is an entry in a register of baptisms, are other entries similar to yours in how they are worded, phrased, and organized? Are there other pieces of information in most of the other entries that are not included in yours.

Page 22 of the second edition of the  Standards Manual written by the Board for Certification of Genealogists (BCG) mentions “external consistency” as a key element in source analysis. I’ve always referred to it as looking at a document/record in context of others in the same set of records–pretty much the same thing.

No record or document is created in a vacuum.

Although if your research is very disorganized and tracked on small slips of paper some of those little bits of paper may end up in a vacuum, but that’s not what’s being discussed here.

They do it. They find something when they aren’t expecting to and in an attempt to save it, they tuck it in a safe place out of the way quickly. The problem is that sometimes that safe place is a logical one and sometimes it is not.

And because they do it, when you go through a relative’s papers you should go through everything one sheet and one page at a time.

When we went through my great-aunt’s personal family papers, tucked in between two pages in the back half of a photo album was her brother’s discharge papers from the Illinois National Guard. The photo album was only half used and the discharge paper was discovered after turning from one blank page to another. There were pictures of her brother in the front of that album and it made sense to put it there. But if I had not looked through all the blank pages I would not have found it.

Occasionally there may be a declaration of intention and those can provide more information.

But even those little bits of information can be helpful. The document puts your relative in a place on a specific date. If the law was being followed, he had to have been in the United States for a certain amount of time specified by law. The place of the naturalization could be a clue and the witnesses may have known the ancestor in the “old country” or, in some cases, even been related to him.

Those records might not be as useless as you think.

If there is a chance that the person you match might decide to make their DNA results “private,” take a screen shot of the details of their match (including their tree) while it is still public. Sometimes for one reason or another a person decides to make some or all of the information they have attached to their DNA results private. If you wait to take a screen shot of that information it may disappear.

At long last! Genealogy Tip of the Day book is here. 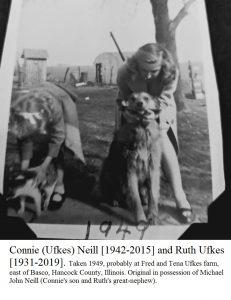 My Mom and her Aunt Ruth. Animals unidentified.

This ran in 2015, but it’s worth mentioning again.

We all have relatives of whom we neglected to ask questions or otherwise probe for family genealogical information.

Years ago, a well-known genealogist wrote that her Italian immigrant ancestors in the United States in the early 1920s would have had a certain type of celebration and eaten a certain type of dessert at the holidays. The statement struck me as something of an assumption. She didn’t mention any family members who remembered being at this type of event or having memories of Grandma or a family member making a certain special pastry. The writer indicated she had read about the tradition and assumed that her relatives had to have done it.

It can help your research to learn about cultural practices of members of your ancestor’s ethnic group, social class, local area, etc. It can be fun to incorporate some of these traditions into your modern life. It broadens your perspective. But don’t assume that just because a certain ethnic group usually “did a certain thing” that your relatives had to do it as well. Families can be different for one reason or another.

Four of my great-grandparents were the children of German immigrants. I didn’t know that in many German families “beer” was a thing until I was in college. For one reason or another, it wasn’t a “big” thing in my immediate family.  Although they did speak German at home, (until World War I) gave their children ethnic names, and drank tea like it was going out of style (that was an Ostfriesen thing). My 1870-era Irish immigrants practiced no Irish traditions.

Every family is different. It’s best if you can to ask about what traditions were practiced in your family, if you can.

Assume that you should not assume.

Family traditions are often a mix of fact and fiction–where the fiction has been slowly, and sometimes unintentionally, added to the facts over time. The teller of the story may believe it because they heard it many time or because a beloved family is the one who told it to them. Other times relatives intentionally embellish stories of their own life with details that are not true or complete events that did not happen. They may tell the story so many times over so many years that they begin to believe it is actually more true than it is.

Write the story down as the person told it, including their name, date, and (if applicable) details of how likely it was their memory was accurate or if the individual appeared to be having recall issues.

Then work on seeing what parts of the story can lead to actual records.

Consider (if possible) re-interviewing relatives after another close family member dies. It’s not just “family secrets” that may come to life. Sometimes the fact that someone died causes living relatives to remember things they could not remember before–even details that are of an innocent nature.