Unexpected first names that seem to appear out of no 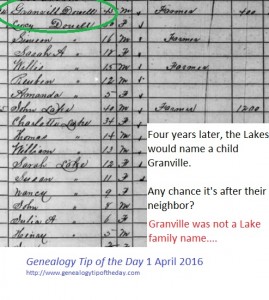 where usually don’t. There’s a reason, it’s just a matter of finding what that reason is. The family of John and Charlotte Lake of Chariton County, Missouri, contained a son Granville, born in the 1860s.

The first name did not appear in earlier or even later branches of the family.

Browsing 1860 census for the family gave the probable origin of the name:

the neighbor was named Granville Dowell

There are several reasons to browse the neighbors in a census.