In census records where relationships to head of household are stated, “boarders” may be boarders, but they could be related as well. This 1880 enumeration includes a boarder with the household who is actually the wife’s nephew. 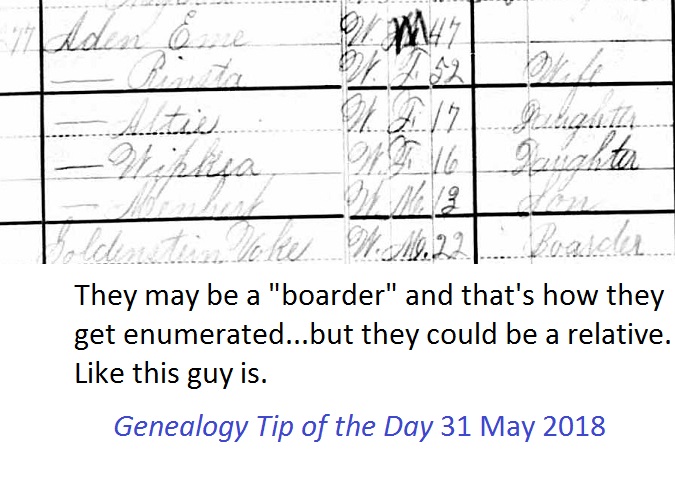 If you are working on a more recent relative and you’ve got a copy of their “funeral book,” look and see if the names of those who came to pay their respects are in the book.

It is a good way to get ideas of who might have been your ancestor’s associates and who was alive when your ancestor died. They may have even written in their city of residence.

And there’s always their signatures…hopefully they are readable.

This post includes thoughts…without necessarily answers. If my daughter tells someone her date of birth, she is a secondary source of that date. She has no first hand knowledge of her date of birth. If I tell someone that today is my daughter’s 21st birthday (which it isn’t, but pretend that it is), is that secondary? I was present at the birth, but if I say it or write it down 21 years later is that record primary or secondary? If I write it down with a month of her birth, that probably would be considered primary. But what about 21 years after the fact, even if I had first hand knowledge of the event?

Keep in mind that these patterns are trends and social customs that your ancestor might have followed. They are not law. 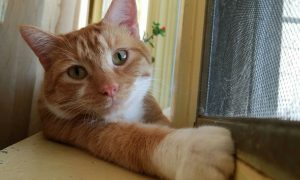 Sometimes illustrations have nothing to do with the post, but Journey reminds you to keep reaching for the answers and don’t let a plant grow from the side of your head.

We are defining “ancestor” as someone from whom you descend–that’s why we say they have to reproduce even if they don’t get married.

Dying usually happens whether your ancestor planned for it or not. 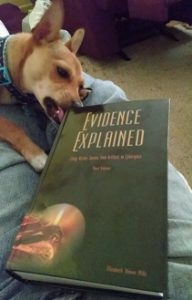 Two excellent ways to strengthen your research is to write it up and to cite what you write.

It is especially true on a person or family that is giving you difficulties. Write for an imaginary reader that does not know anything about the family. Explain what you know, how you know it, and where you got it.

Give reasons for your conclusions.

Have a source or reference for every statement of fact that you make. Re-evaluate those statements you can’t document.

Writing for someone else to read and understand often helps us to get at errors or omissions in our research.

Citing our sources frequently does the same thing.

You don’t have to be as dogged as Riley in citing your sources, but some attention to them will strengthen your research. These manuals will help:

Upon occasion, one hears fellow genealogists being slightly judgemental about a specific ancestor. Instead of getting bogged down in that line of thinking (which doesn’t help your research any), think “why?”

Putting yourself in your ancestor’s shoes gives you a different perspective. If you were twenty-six years old, widowed, the mother of two small children, unable to speak English and living where you had no relatives, what might you do? You might marry the first German speaking single male around–one who would not have been your choice if you were twenty years old and still living at home with no children to support.

If your great-grandfather “disappeared” consider where he might have gone and what he might have done in an attempt to find him. Was there a war he might have enlisted in? Did he have some type of psychological problems? Maybe it was even better that he left, despite the disruption it caused in the family.

If you never personally knew the ancestor, leave the judging to someone else. Focus instead on your research.

On the flip side of this, I know one researcher who thought it was “romantic” that her great-great-grandmother found the “love of her life” and left her husband and headed out West on some grand adventure. The researcher was completely enamored with the story. Now if HER mother had done the same thing, I’m certain her response would have been somewhat different. 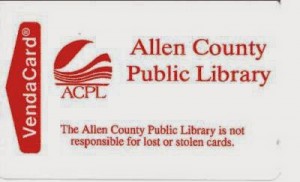 There is still time to join me on my annual group trip to the Allen County Public Library in Ft. Wayne, Indiana., this June. More details are on our announcement page.

But then there are those individuals whose last names are, for the most part, spelled consistently–this is more often the case the more recent the relative.

I don’t refer to Christian as Christian Trautvetter–I refer to him as Christian Troutfetter. The same for the other relative. I use the Trautvetter spelling for members who used that name or for relatives who have so many variants that I can’t tell if they had a preference.

Documents are transcribed as written. It is when I’m writing about the people that I have to “pick a spelling” if there was not one used a majority of the time.

Subscription/unsubscription links are on every blog page–and in every email sent.