Was it easy for your ancestor to simply “pick up and move?” While it is possible for anyone who really wants to move to do so, some occupations and lifestyles make it more difficult?

How portable was your ancestor’s occupation? Some could easily transfer themselves to the unsettled frontier and some could not.

Sometimes researchers avoid getting a record because “I already know what it will say so there’s no need to bother with it.”

And there are times where a record confirms what you already had or doesn’t tell you anything new. But there are also those times when the record contains unexpected information.

You never know what a record says until you see the record. And it’s always possible that what you “think you know” is not correct in the first place.

Genealogy Tip of the Day is sponsored by GenealogyBank.  They are currently offering Tip of the Day readers a subscription (annual) that works out to less than $5 a month!

Try and determine when your relative learned that story they are telling you. Would they have been a small child when they heard it? Memories that come from when the person was a child can be impacted by their immaturity and inexperience with life. Sometimes children draw interesting conclusions about family events only to pass them on as facts years later.

Three slightly different dates of birth for an ancestor is not the end of the world as long as the dates are consistent. One of my relatives born in the early 19th century has three different dates of birth from three different records. The dates are only two years apart. The place of her birth is consistent as are other details about her life. While I would like to know which record is “right,” it’s not the end of the world since the other details in her life (her name, her place of birth, her parents’ names, her husband’s name, and her children’s names) are all consistent.

If there were three women born in her village with the exact same name within two years, then I would have a problem. 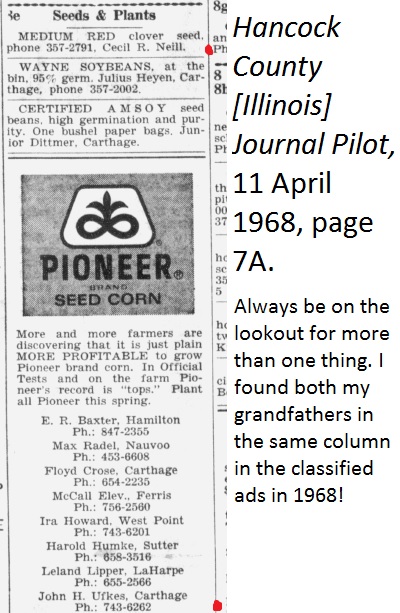 Always be on the lookout for references to more than one person in the same record. This was a coincidence, but one never knows–and sometimes indexes will not always indicate when a name appears more than once on the same page.

This 1968 issue of my “hometown paper” had advertisements involving both my grandfathers in the same column. I searched for one and found them both. It never hurts to keep your eyes open.

Many individuals who received military land warrants for pre-Civil war service in the United States did not actually settle the property. Instead they sold the warrant to someone else. If that’s the case, the back of the original warrant (housed at the National Archives) may have their signature as a part of the assignment of the warrant.

Of course, they also could have just made their mark.

That way it has been made clear that the stone did not give the actual date of birth.

Of course if the birth date is on the stone it should be entered in your database–citing the stone, but not indicating that the date was calculated.

I maintain the following genealogy blogs (unsubscribe links at top of each page):

The fee-based newsletters are Casefile Clues and the weekly blog update.

If you have difficulties with unsubscribing, please email me at mjnrootdig@gmail.com and tell me which blog you are having issues with.

Records in the United States indicate an ancestor was born in Germany on 29 September 1808. Those records all provided secondary information regarding her birth, but they were all that I had.

Records of her baptism in Germany indicated she was born on 29 September 1807. The place of birth is consistent with United States records and the later marriage has her married to the husband she later immigrated with.

I know I have the right person. The church record of her birth and baptism is a contemporary one, so that’s what I’ll use as her date of birth in my files–along with the source.

I won’t change my transcriptions of the records in the United States as that would indicate they say something they do not. I will make a notation (clearly indicated as such) that the record of her birth in Germany provides a slightly different date.

If your ancestor owned property, make certain you obtain documentation of both land transfers, how they obtained it and how it left their possession. This may include deeds of purchase and sale or it may include: