Years of immigration as given in early 20th century United States census records can be incorrect. The immigrant may have misunderstood or misheard the question and thought it meant when did you arrive in this state instead of the United States. The immigrant may have immigrated as a child and not really remembered when he immigrated. Or another member of the household may have answered the questions and have been unfamiliar with the immigration of the person in question 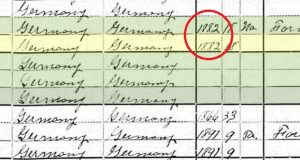