When explaining something to someone or creating a post, make certain that you include all relevant detail. In yesterday’s tip regarding the “parents’ home,” it wasn’t mentioned that the father had died nearly ten years before the daughter married and that the mother had moved over 100 miles away shortly after his death. The parental home the daughter lived in was one where her mother had lived, but the father never had.

But be careful when deciding what is relevant and what is not. The weather on the day your ancestor was supposed to get married could impact the marriage and may be relevant. The fact there was a wine stain on the altar carpet and your father noticed it during the ceremony probably isn’t.

One letter can make all the difference. Technically this 1966 obituary should indicate that the deceased was married at the home of her “parent” as her father was deceased by 1905 and her mother did not marry again. Errors of this type are easy to make, especially when the typesetter, proofreader of the local newspaper is not familiar with the family–not to mention this marriage took place sixty years before the obituary was published.

Don’t believe everything you read in print. It is easy to make one little mistake. 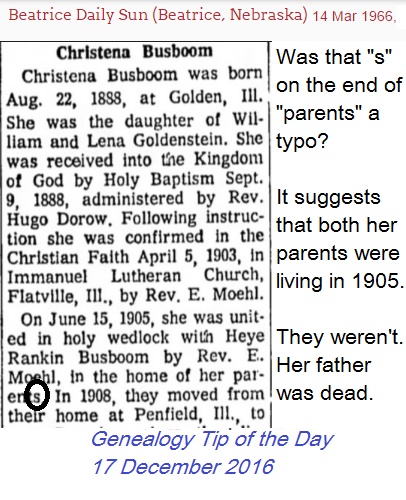 Someone living as a boarder with your relative may be more than a boarder–they could be a relative as well. Don’t assume that first cousins or nephews would be listed with those relationships in the census. They could simply be enumerated as a boarder.

And that hired man?

Depending upon the age or the situation, he could end up being the son-in-law or the widow’s new husband.

Books are a great place to look for pictures, clippings, and other ephemera. Things frequently get tucked away in books (Bibles, etc.) for safe keeping and some times get forgotten. if a relative says they have no pictures or clippings, ask if they’ve got any hidden away in a book. Just this week I discovered a picture I had stuck away and forgotten about.

If you can’t find your relative in an index or record with his actual last name, try searching for him listed with his middle name as his last name. Hinrich Jacobs Fecht is enumerated in at least one census record as Hinrich Jacobs.

Never assume that a widowed relative did not marry again after their spouse died. Always search the records. One reason that female ancestors “disappear” after their husbands die is that they are living with a subsequent husband under a new last name.

Widowers or widows with young children are more likely to marry again, frequently for financially pragmatic reasons. Some may wait until “late in life” to marry again–at a stage in their life when descendants do not think to look for a marriage record.

Records of later marriages may give detail on the ancestor not given in their initial marriage record.

If the subsequent marriage does not go well and results in no children, reference to it may not be made in an obituary, death notice, tombstone, etc.

When that widowed relative “disappears,” it’s plausible that they wen

t to live with or near a child. The Tjede Ehmen mentioned in this clipping is

enumerated in the 1920 through 1940 censuses with a child in Moline, Illinois, and died in Seattle, Washington, in the 1940s where another child lived.

This item was obtained on GenealogyBank.

For those who have asked, this is a partial list of genealogical references on my bookshelf. I’ll update it with others as I create the links, but I’m only going to add books that I personally have experience with and that I actually use. There are other good books out there, but I only mention ones with which I have actual experience.

Your experience may vary. Sometimes one can get used library editions for low-cost–other times not so much.

Attending seminars, reading books, following blogs, and reviewing journal articles are all great ways to learn genealogical skills, but the best way to really up your skill level is doing actual research.

One way that I’ve enhanced my skills is to go back and completely research a family that I thought was done (all children, their spouses) for a couple of generations by searching every possible record I can find, preferably during a time period when more records are available. I do this even if I don’t think the records will “help me” as sometimes reading them when I “know the answers” helps me to interpret the records. That helps to build my skills for those families where I don’t know as much and the records are not as detailed or complete.

And sometimes I realize I don’t know as much about the “already done” family as I thought I did.

Be careful entering these names and the relationships in your database until you have a better idea of who is the parent of whom. Indicating that your relative raised non-biological children as their own is advised though as it helps to explain the connections that exist among people. In some families it is better to write a summary of the individuals and relationships involved before forcing that data into a genealogical relationship database.